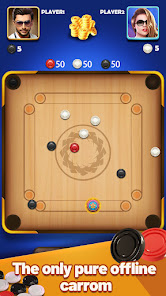 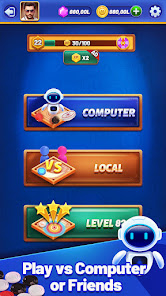 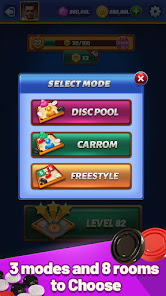 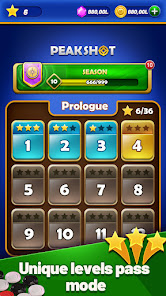 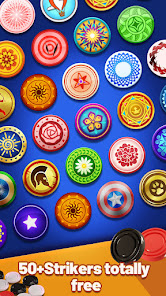 Carrom Lite is works on slow networks & offline, plays bot board game fast and comes in a small package.

If you want to play carrom offline game 2 player anytime and anywhere, but your mobile phone has insufficient memory and the network is often not good, you can only connect to 2G or 3G network, it is recommended to use Carrom Lite Bot Offline.

CLASSIC CARROM: Everyone must shoot the carrom ball of their chosen color into the hole, and then they chase the red ball, also known as the “Queen”, hitting the Queen and the last ball in succession will win real carrom board offline game.

CARROM DISC POOL : In this mode, you must set the correct angle. Then shoot the carrom ball into the pocket. Without the queen ball, you can win by hitting all the balls into the pocket in carrom bot board game.

FREESTYLE CARROM: Points system, regardless of black and white, hits the black ball +10, hits the white ball +20, hits the red ball queen +50 in this freestyle carrom, the person with the highest score wins in the carrom board bot.

-Play with friends: You can enjoy the wonderful carrom bot game time of carrom offline with your 2 friends.

-Various skin options: Dozens of carrom offline game skins to choose from, choose your favorite carrom board suit when fighting against people!

The Carrom Lite offline bot package is small, but the fun is infinite!
If you are still troubled by poor network and low phone memory, come experience Carrom Lite-Board Offline Game now!

Save The Dogi - Dog vs Bee