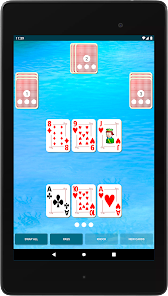 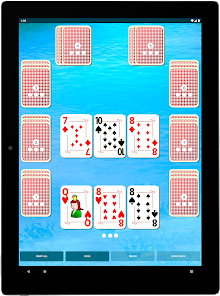 Schwimmen Deluxe, that’s the German card game “Schwimmen”. It is similar to “Thirty-one”, “Big Tonka”, “Nickel Nock”, or “Blitz”. In “Schwimmen Deluxe” you play the game exactly as you like it:

Here are the rules of the game again in case you don‘t remember them all:

Your goal is to score as many points as possible with a hand of three cards. In doing so, an ace counts eleven, king, queen and jack count 10, and the other cards count face value. You can add up the score of the single cards, if the cards are of the same suit. The highest score possible amounts to 31, which is called a “blitz”. It can be achieved, for example, by an ace, a king and a ten of the same suit. Besides, three cards of the same rank (e. g. three jacks) count as a score of 30 ½.

Then the game starts. The players take turns and have the following options:

If all players choose “pass”, new cards are drawn from the stock to the table.

At the start of a series each player has three tokens. If a player loses a game, she also loses a token. Only in the special case of two players playing the game and one of them having three aces, the loser of the game has to give up two tokens. When a player has lost all of her tokens, she continues to play on a “free ride”. Losing again, she is eliminated from the series. The last remaining player in the series has won the series. If she still owns all three of her tokens, she has “won with crown”.